When you consider that nearly three quarters of Australian’s are now on social media, it’s vital that tourism operators appreciate the impact of this on their business, and consider prioritising social media in their marketing activity. For the past six years, Sensis have conducted an annual Social Media Report, surveying Australian consumers and businesses on their social media use. This report has become a critical benchmarking tool and provides crucial insights into the space.

Many businesses may question the relevance of social media to the promotion of the business, and why they should invest time and money into it. TNE have broken down some of the key findings from the report that should assist in addressing these queries.

Who is playing where?

50% of Australians access social media once a day, with 26% logging in at least 5 times a day. 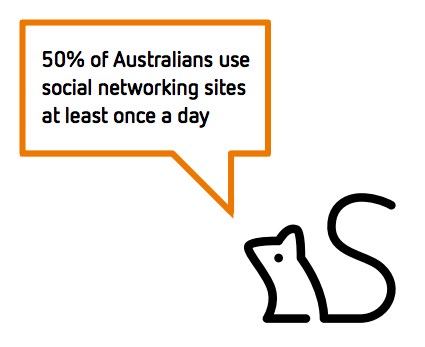 Facebook has maintained its title of the most popular social media platform, 95% of users stating they have an active account. The average number of times people access Facebook has remained relatively steady at 32 times a week, but the amount of time spent on each occasion has increased from 17 to 24 minutes. This means users are spending over twelve and a half hours a week on the site on average, which is four hours more than last year. It is absolutely imperative that brands and businesses are visible in this space with relevant and engaging content, otherwise other brands and information will fill their valuable news feed real estate.

Instagram (31%) is on a growth trend, almost doubling its reach since 2013. The main attractions are the visual content and the ease of use of the platform. Instagram is an especially relevant tool in showcasing Victoria’s High Country, as the region has visually spectacular scenery to share. This tool is vital in the inspiration & consideration cycle of the consumer.

The top reason they are logging in? As expected, people ranked catching up with family and friends (95%) and sharing photos and videos (36%) as their top reasons for logging into social media, however other reasons include following or finding out about particular brands and businesses (16%) and researching holiday destinations or travel offers (12%). The most impressive statistic for the tourism space is search behaviour when logged into social media. When asked what they were looking for on their last search occasion, holiday, travel and accommodation were the highest amongst recent searches (21%). A staggering increase from 2015 (7%) and 2014 (11%)

What to consider when planning, posting or commenting 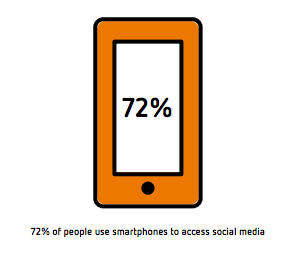 72% of people use smartphones to access social media, the first year to eclipse desktop use. This should influence the type of content, the length of copy and even the time of day you post. Video content is the king of content right now with 28% of respondents to the survey saying they accessed social media to watch video content. Short sharp copy, visually pleasing images and engaging content are key for display on mobile devices, and encourage more engagement. A content issue was the main factor cited by those who stopped following any brand or company on social media in recent months. Irrelevant, unappealing or excessive content generated the most criticism. Too much advertising emerged but was not as much of a barrier as the other content issues.

Times of the day

Clearly, the increased us of social media has influenced when and where people are accessing social media. First thing in the morning and after work seem to be the key times of day people are checking in on their accounts. These times should be considered when planning and posting, as this will increase your chance of engagement and reach.

Brands also need to pay close attention to ratings and reviews with 31% of social media users rating an organisation’s products or services in the last year, which is higher than in any prior survey. The average number of ratings provided last year was down from 14 to nine but this still suggests people provide ratings at least every two to three months.

Online blogs and reviews remain a fairly widespread influence on purchasing decisions with 60% of social media users claiming to read them before making a purchase. Fifty eight percent will look at up to five reviews before making a decision, which means around four in 10 read even more. Similar to the results from last year identified that 27% of online users post blogs or reviews. Their estimated average number of posts has nearly doubled in the last year to around 14. It is more important than ever to be visible and transparent on social media, and comment in a timely manner where possible. It shows you are open, honest and reliable. This will only help influence those who go out searching blogs and reviews to help them make a purchase decision . Attitudes towards advertising on social media remain polarised in a number of respects. There are still over a third of people who are happy to see ads (34%, was 38% in 2015) and over four in ten click on them occasionally to find out more (43%, was 42%). It is still the case that a slight majority (53%) take no notice of such ads, but this has come down from 69% in 2014 and 55% last year. A new statement included this survey reveals that over four in ten will inspect a brand’s social media presence before making an online purchase if they had not previously purchased from that brand’s website.

Social media is one of the only digital avenues where businesses can have a two-way communication with customers, giving them the opportunity to receive feedback, monitor sentiment and build a relatable brand personality. They can do all of this with minimal marketing spend, making social media one of the easiest and most cost effective channels to get in front of customers.